A downloadable game for Windows

You cannot go back, there is no way to ignore it, no matter how difficult and gross it is…. If it is written in the To-Do, it must be done. Because that's why you created the list, to do your daily chores, such as watering the plants or going to pay your debts!

Interact with the inhabitants of "That Place", live a day in the life of a 16-year-old girl while she completes her chores, has fun with her friends and goes to the mall!

You can just do the chores and rest, or meanwhile discover what is Esther hiding in her basement!

8 secrets notes to find, discover the story of your neighbours!

A lot of references! Can you found them all?

Please don't talk with two or more NPCs at the same time, this make a bug on the dialogue box.

I did talk with all the NPC, and checked about everything, but don't seems to find the reason to why she would want to kill herself ?

I mean, she had a love interest and friends, she seemed to have a 'normal' relationship with her mother. I don't seem to find any motive behind her actions

Nice game tho! I enjoyed it !

this was a very good representation of a really difficult topic. I had a really good time playing it!

When i try to download it it downloaded as a note, not as a folder, is there a way to fix this?

I really liked the game and I hope you like my gameplay!
My channel is SilverChiara. I hope to see more from you!
the game starts at 06:45. Even though I couldn't show the
ending because of youtube policies!:(

I could only find 1 ending... still looking for the others lol.

I played through the game and actually uploaded my gameplay to my channel. This was an experience that I certainly was not prepared for. Although it was fairly obvious from the beginning what the ending would entail, it still caught me off-guard. For such a simplistic game and story, it is quite impactful. Unfortunately, I couldn't find the fourth ending, but I'll pretend it involved saving Veronikka. Thank you for this game. Don't finish your chores.

I'm glad you found all endings! ヾ(＠⌒▽⌒＠)ﾉ (the fourth is the bed saying "Bye")
I liked the detail of the line against suicides to help the people ♥

Ps: I laughed a lot with your video xD ♥

Ah! I thought it may have been the fourth ending, but I wasn't entirely certain. I felt, given the context of the video, that addressing it would be the right thing to do. If I can help anyone with my bumbling, I want to.

Thank you for your kind words, my friend! I'm really happy to hear that you enjoyed the video! I look forward to seeing whatever you have planned for the future!

Reply
Final_Destiny05910 days ago(+1)
I Really enjoyed this game, and i like all the endings that their was, nice and short, with tons of personality
Reply
Acid x Kitty9 days ago

PS: Pedro sell a lot of random things |◔◡◉| you get the four ending saying "bye" to Veronikka~

The Dolphin has open a game store now, I don't know what this fish wants (┛◉Д◉)┛彡┻━┻

But from my take on this game, Veronikka just wanted a quiet life while doing her to-do list, but Milena (that's most likely but maybe not) maybe tampered with it making Veronikka injure herself because of an OCD to complete the to-do list. (hence why she said in the S note that it's "gross but still in the to-do list" and had to do so) Meanwhile there's other things going on around her with "that man" and something's off about Esther (I mean obviously after you find the basement but the sailor scouts had more to say) so hopefully at some point i can find a 4th ending. Aside from the ost playing a lot which makes playing a bit tedious (maybe change every now and then depending on the building?) but good job on the game :)

I think you posted it some days ago but Thank you again!

This game.....had such a twist it left me speechless at the end of it! Even now I'm like ..... huh? o.o haha but enjoyed it loads! I got the ending with the knives by the by, and implore people to find all the endings! definitely leaving a follow and look forward to more!

I like so much your video and the part of Milena was so funny!

Thank you so much for play my game and the support! ≧◡≦ ♥ Now I making another game, I hope you can play it sometime (/▽＼)

But  of course! Just let me know when it comes out! =D

Hi, I enjoyed your game! I'm so glad one of my subs recommended it!

Great video! I'm happy you liked it! Thank u so much for playing! ♥ ôヮô ♥

Thank you so much for the video! (ﾉ◕ヮ◕)ﾉ*:･ﾟ✧

Okay, because the game seems to have a major update, I once again play Veronikka's To-Do. But it seems I still can't do anything to help Veronikka's.... Which is fine on this type of game, so no worries. Either way, I love the enrichment of the lore by adding some hidden text and picture to the game, also some characters now have their own sprites. The addition of dialogue speed up also makes it easier for people to play it over and over in order to unlock or search for another story, very nice. Also I see that the developer changes the red cross logo, good thing, as it was not allowed to be used under the Geneva Convention. Anyway, keep up creating game!

The Dialogue System was very difficult to change ಥ_ಥ Thank you so much for your support! I'm glad you liked the secret story!

I'm already making another game  about my    dreams (⊙‿⊙✿)

Sounds nice! Looking forward to it!

It wouldn't be bad, but I ultimately was not able to get very far into it due to how slowly the text is displayed with no option to skip forward. In a text heavy game, that's a seriously big QoL issue.

Hi! I'm working on that! In the next version you can skip the text.
I would like you can play it! (◕‿◕✿)

Awesome. Click to advance functionality is something I'm used to after playing VNs, since I'm a pretty fast reader. I want to try it out next update, so I'll follow you.

Thank you!♥ The update is available!╰(◡‿◡✿╰)

Hi, I make a video with all endings, I hope you like it 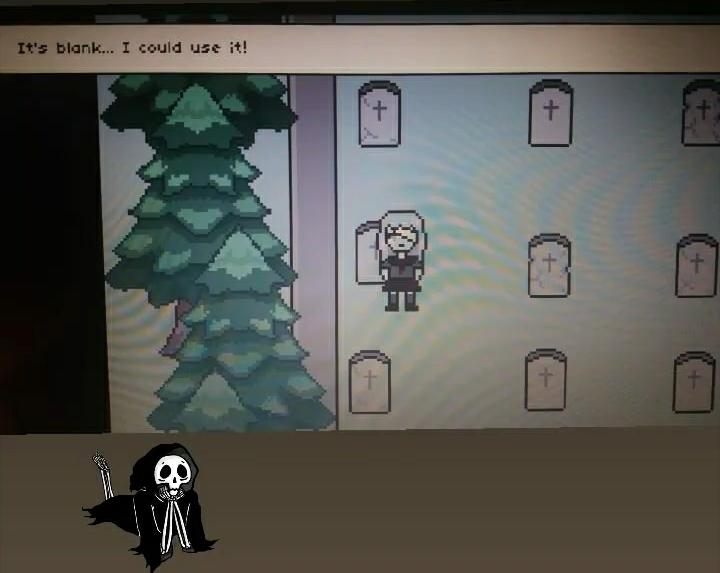 I like this game! How can I get the 3rd ending?

I'm so happy you like it! ♥♥♥ Here is a video with a guide on how to get all the endings!

Thanks, I made some advertising on my ig with this pic XD anyway I'm sorry for Veronikka, I loved her... Like I said in a video this game that help us to remember that suicide and depression should not be underestimated... :(

I'm glad you like Veronikka's personality! and I'm happy to know that this game left this message! (≧◡≦)♥

Well It seems my suspicion are correct. Sad Veronikka.

Good game btw, I didn't expect it to be quite big. The text dialog speed could be speed up a little bit I think.

Thank you so much for playing! I love so much your video of Veronikka!

Now, I working on improvement some details like the dialogue and the red cross (I didn't knew anything about that! thank you for advise!).

PS: The weird pink circle (the plush) is a reference of "Boo-Balu", my another game (lol).

Okay, I finished unlocking all the three main endings. For the third ending I need a help from Insane Side video because I was confused on where to look for the event trigger after getting out of the basement and walking aimlessly searching for it for more than 30 minutes. So I give credits to Insane Side too, thanks for the video!

But I didn't watch until the end to avoid spoilers on how the third ending will end, and I must say I was shocked on how it turns out. Leaving me speechless.

Is the most difficult ending to find!

But now, in the new version, with a new ending(available soon) you can try "save" Veronikka.

Thank you very much for your videos and the support! Ｏ(≧▽≦)Ｏ ♥

I can try to save Veronikka?!? On it then!

Some new things has been added (like secret notes), and a alternative ending too!  This version is available to download now! (•⊙ω⊙•)

An amazing game, with references, original art and a very unusual ending in a video game... I love the third ending, a little difficult to find but not impossible, you just have to pay attention to Veronikka's comments.

I just have a problem with the antivirus (Avast), but is a false positive.

To evitate the problem with the we remove it temporarily :(

I hope you can solve it, I loved their apparition in "Space Tinty" and "Boo-Balu"

Okay then, I'll wait for the English version.

Hi! the english version is available now! I hope you like it! ♥ 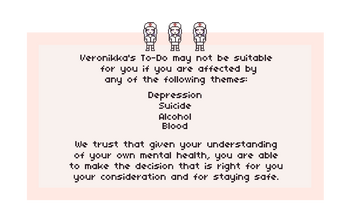 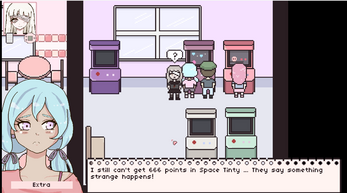 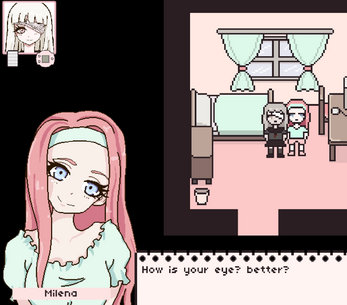 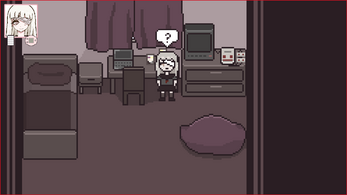